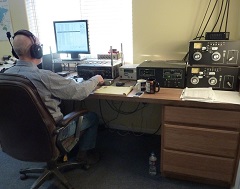 N6MI's best band was ten meters (428 QSOs, 30 zones, and 76 countries). Conditions were excellent on most bands, though N6MI recalls that conditions were "5% better" in the October CQ WW DX SSB. Both contests included long runs on 10 meters on Saturday morning (California time). Often, the biggest problem was where to point the beam because the bands were almost always open in more than one direction. 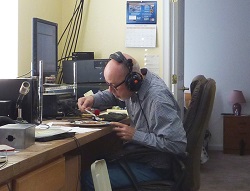 N6MI was very impressed with the twin AF6O delta loops on 40 meters. N6MI reports that some European stations just popped out of the noise on the EU-VK loop. N6MI's highlights include: being called by a VU2; working deep Asians during the entire contest; working Europe on 40 in the early evening; proper English tea breaks; breaking most pileups with the first or second call; the Sunday sunrise (windy with angry clouds); taking naps on a real bed (instead of the floor of the N6MI contest van); the luxury of operating without having to drive to a remote location in the ham van; and making AF6O laugh with silly CW frivolity.

N6MI had a macro for "AF6O is at the paddle" (to be played at appropriate times during the contest). N6MI acknowledges that his CW is substantially better on Saturday, when he is rested. N6MI was pleased with the meal service provided to guest operators; AF6O would not confirm that this service is available to all visitors.
CQ World Wide DX Contest SSB Claimed Scores
October 2014 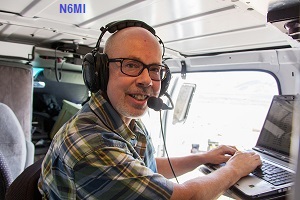 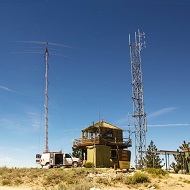 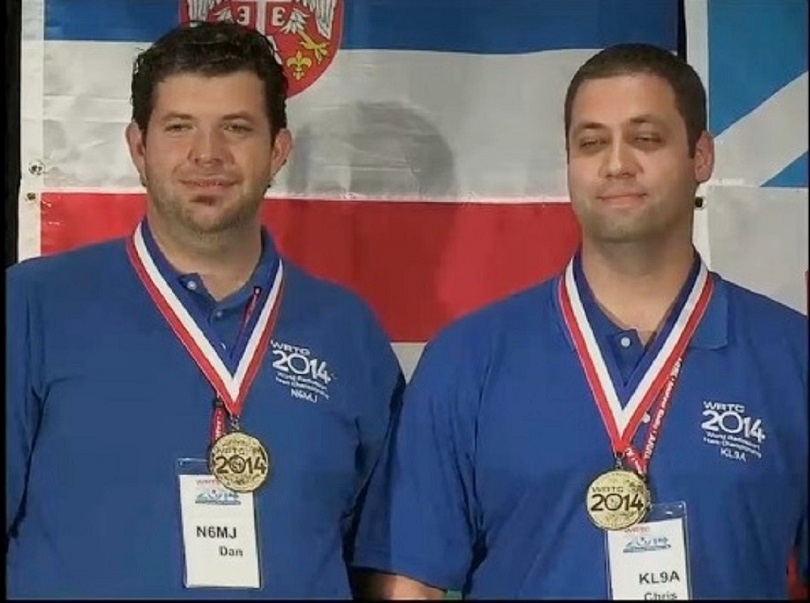 SCCC has won still another gavel in a VHF contest, our eleventh (11th) during the last four years. But it could be our last gavel for a while.

The results of the January, 2014 VHF Contest are in the just-released digital edition of the July, 2014 QST.

SCCC members were #1 in four individual categories in the January VHF Contest.

Look for W6TTF and N6NB as 10-band rovers on a route from Madera to Los Angeles. N6TEB and K6WCI will be in the limited (four-band) category on a different but similar north-to-south route. N6GP, also in the four-band category, will be roving in L.A. and perhaps the high desert or San Diego.

Be sure to look for W6TE on Mt. Frazier, N6MI near Barstow, NI6E near Chiriaco Summit and N6MU in Panorama Heights as fixed hilltoppers. KB0ZO is a fixed station that will be operating in Victorville as a memorial to the late KI6FF.

I apologize if I missed anyone who is roving or hilltopping. If anyone else would like to rove, please let me know. There are 10-band stations available if others would like to join the roving group. less
Capture The Flag T Hunt - Anthony Cioffi N2KI
June 2014 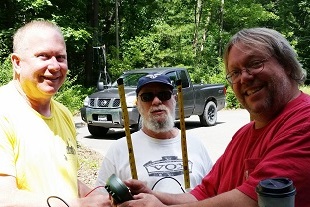 Well hello everyone! Today was our Capture The Flag Fox Hunt sponsored by the Hudson Valley Direction Finding Association of Orange County NY. This was the first event of its kind in this area and I am happy to report, a success.

The event promptly started at 10 am with a four hour time limit. The WEST team hid their transmitter in Highland State Park.

Promptly at 10am the transmitters were activated. Both teams were required to take their first bearing from where they hid their transmitter.    more 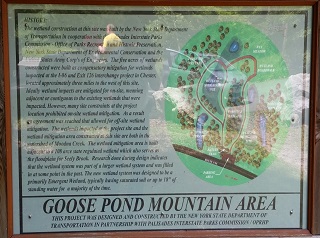 From the TEAM WEST location, we all concurred on the first bearing of 133 degrees. We then set out in different directions to obtain more bearings so as to triangulate the signal.

KC2YYF heading east and N2KI headed south west. AC2O and N2DBD followed along the bearing zigzagging their way and obtaining bearings on the move. With AC2O's setup, it made this very easy to do.

All the while, we coordinated our information on a local repeater. It didn't matter if TEAM EAST heard us discussing our data because they had a different mission. A couple of more bearings from N2KI put the signal into Goose Pond Mountain State Park a little over 12 miles away. This was confirmed by AC2O and N2DBD.

Driving west along Rt 17M, just as I was passing the park I was able to tune 10 kilocycles off and still have a full scale signal. So it was surely in this area. 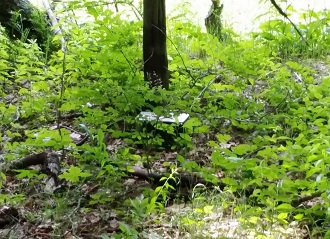 TEAM WEST members all arrived at the parking area just about the same time. Using a 4MHz active attenuator proved to be the tool to use for sniffing out a 5 watt transmitter in close proximity. It is really amazing how you can just walk up to the transmitter using this method with a tape measure beam.

One hour and twenty-one minutes after the start, we had found the box. Victory TEAM WEST! We dialed the phone number on the box and read the code statement affixed to signify we had found it.

TEAM EAST continued on to pursue the WESTS' transmitter to further hone their skills, they successfully found it by about 1 pm. What a great job by all the participants. We all had a great time and are looking forward to the next event!

Information and photos from this event will be put on the HVDFA website soon. That's it for this edition from the HVDFA, Orange County NY. close
Members Well Placed in 7QP Results
June 2014 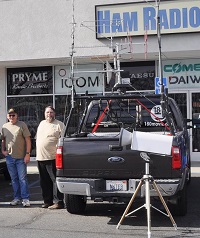 The VHF contest is June 14-15. A number of SCCC members will be active, some at home, some on mountaintops and some roving. Unfortunately, it does not appear likely that we will have as many stations on as we did last year, when SCCC won the gavel for the highest aggregate score of any medium size club in the country.

Probably the largest multioperator effort will be headed up by Dave Smith, W6TE, on Frazier Mountain. His team will be using a motor home, a fifth wheel trailer and several other vehicles plus at least four generators and equipment for every band through 10 GHz. Among those planning to join W6TE on Frazier are K6MI, K6ZMW, W6YLZ, WA6WTF and WB2WIK.

N6MI and K6VCR will be on a mountain near Barstow, using Scott's converted TV news van. They will be on all bands through 1296.

NI6E and K6EPP are planning to tow their newly built tower trailer to the desert east of Chiriaco Summit in DM23. Look for them especially on six meters.

N6TEB and K6WCI may operate at N6NB's hilltop house in Orange County--or they may rove. If they are at N6NB's house, they will operate separately using two completely independent stations for all bands through 10 GHz. They were not sure what they would do at this writing.

Carole, W6TTF, will be roving with 10 bands, mainly to provide rare microwave multipliers for the W6TE group. N6NB may rove, but probably on a limited basis. Several others who have roved in recent years will be unavailable this year for a variety of reasons.
June SCCC Meeting
June 2014 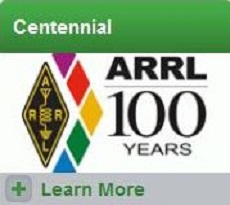 SCCC is the host club of record for the Southern California operation using W1AW/6 as part of the ARRL Centennial year celebrations. The regional activity is coordinated by K6NA.

The week of operation begins at 0000UTC Feb 12th and ends at 2359:59UTC on Feb 18th. Active stations who can put out a strong, clean signal, and handle pileups of domestic and DX stations, may apply to be a W1AW/6 Host station.

Hosts must be ARRL members, but Hosts may invite non-members to operate as guests. Please download and read Rules and Guidelines for Operating. Use a logging program which can produce ADIF files.

Please access www.arrl.org/centennial-qso-party to learn details. The goal is to put W1AW/6 on the air and make thousands of contacts from several sites in the Southwestern Division

All bands and modes may be used from distributed locations, simultaneously, but it is critical to avoid same-mode, same-band duplication in a given time slot. Hence you must coordinate with K6NA for your assignments, which can be chosen in two-hour time slots (start 0200Z- start 1600Z)as indicated in our schedule below. 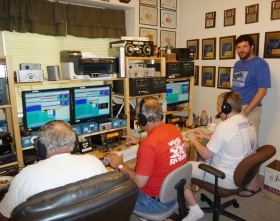 Study the existing UTC schedule by day of week. Determine open time slots which you can support. Choose band and mode for each slot desired. Use the Request Form, visible below the assignment schedule. Your Host request and data choices will be auto-sent to K6NA. The schedule will be updated often.

If you prefer to make a direct email request, follow this format in the message body:


Add as many lines as you can support. Send email to: k6na at cts dot com Your phone number is required. Every effort will be made to accommodate your requests, but if changes are needed, K6NA will contact you. Do not assume you have authorization until you see your call sign block assignments updated on this website schedule! 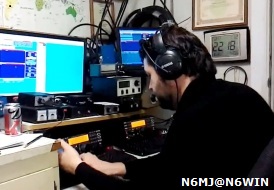 If you need advertising exposure, we have the cream of the crop of amateur radio contesters in Southern California as members of our club. Our website can display your graphic on the right hand side of the web page.

Your support money is used primarily to support the costs of this website. We hope youâ€™ll agree that itâ€™s beneficial to have an ample audience of SoCal contesters viewing your ad.